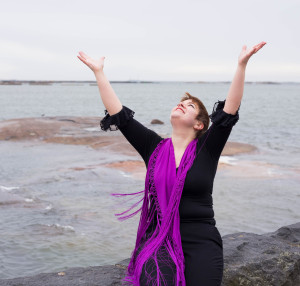 Tove Djupsjöbacka in a nutshell

• Music journalist
Tove Djupsjöbacka is a journalist specialised in music (especially music cultures around the world, flamenco and Finnish folk music) and dance, working mostly in Finnish and Swedish. She has been a freelancer for Hufvudstadsbladet, Finland’s biggest Swedish-speaking newspaper, since 1999 and has also worked as their music editor at several occasions. She worked as editor at Finnish Music Quarterly (2-3/2012), editor (2007-10) and editor-in-chief (1-3/2011) at folk music magazine Pelimanni, editor at the web site Folkmusic.fi (2007-10) as well as editor (2003-05) and editor-in-chief (2005-08) at flamenco magazine Letra. As a freelancer she has had articles published in among others following newspapers and magazines: Finnish Music Quarterly, Rondo, Kansanmusiikki and has also written articles for the Finnish music information centre Fimic. Together with Lena von Bonsdorff she has written the 50 years history of Martin Wegelius -institutet ”Musik i ingenmansland”, published 2006.

• Soprano
Tove Djupsjöbacka is a soprano and has studied singing at Musikinstitutet Kungsvägen 1999-2006 with Rabbe Österholm and Raija Regnell as her teachers. She completed the exam I with excellent notes in 2005. Among her singing experiences the concert Young soloists with Vaasa city orchestra in May 2006 is worth mentioning. She has experience from the stage in among others the children’s opera Pappa Bach (Finnish National Opera 2009), Jaakko Kuusisto: Prinsessan och vildsvanarna (Musikinstitutet Kungsvägen 2003 and 2005), Lars Karlsson: Rödhamn (Finnish National Opera 2002) and Jerome Kern: Teaterbåten (Svenska Teatern 2002-03).
Tove Djupsjöbacka is a member of two professional choirs:Helsinki Chamber Choir (former Radio Chamber Choir) since 2009 and Sibelius Academy Vocal Ensemble since 2011. She also sings with Chamber Choir Utopia since 2004. She has been singing in Spira Ensemble (2013–16), Akademiska Damkören Lyran 2002–08 (vice conductor 2003–07) and Wegeliuskören 1997–2002. Important conductors have been among othersNils Schweckendiek, Andrew Lawrence-King and Kari Turunen.

• Flamenco
Tove Djupsjöbacka is a versatile flamenco expert. She emphasizes the importance of knowing flamenco as a whole as well as communication between dancers and musicians. Knowing the tradition is the base, from there you can reach out to even more radical horizons. She is the only flamencologue in Finland with a Máster de Flamenco degree from Escola Musica Superior de Catalunya 2018. Since 2016 she perfoms regularly with the ensemble Camino flamenco, including Ulla Mäkilä (vocals), Toni Jokiniitty (guitar), Erika Alajärvi (dance) and Marja Rautakorpi (dance).
She started studying flamenco dance in 1995 and her most important teachers have been Katja Lindroos, Maija Lepistö, Manuel Reyes, Ángel Rojas and Rafaela Carrasco. From the beginning of her flamenco career Tove Djupsjöbacka has studied both dance and music – cajón, palmas and flamenco singing. She has been performing as a percussionist, palmero, violin and piano player and singer in several dance pieces.
Tove Djupsjöbacka has collaborated with many of the leading flamenco artists in Scandinavia and performed as a dancer in Finland, Sweden and Denmark.
Tove Djupsjöbacka regularly gives intensive courses in flamenco and lectures in different parts of Finland (among others Jyväskylä, Kuopio and Oulu). Among her specialities are courses in flamenco knowledge, bulerias courses and courses combining dance and music (dance + singing + palmas). She has also worked as interpreter and assistant to several Spanish top teachers (Pablo Suárez, David Lagos), been member of the artistic director’s team for the Helsinki Flamenco Festival 2012–2014 and the artistic production team 2018–2019 as well as organized the festival Arte flamenco Helsinki in 2015.